In 2016 The Night Snipers will stand on the main stage of Nashestvie for the 13th time. Participation in the main Russian rock festival has been a part of the band's history for the last 15 years. Each time The Night Snipers presented to thousands of people in the audience their rock-n-roll sets full of drive and energy, many of which were marked amongst the main events of each festival.

Let's recap how it has been from the first appearance by The Night Snipers on Nashestvie.

This festival became the first one in the history of the band and yet, the band was entrusted with the opening of the second day of the festival. Diana Arbenina showed up in a shawl of "yellow papers" that she immediately ripped with words " Worthy music deserves dignified press". The Snipers' set went on for a little over half an hour and consisted mostly of the songs from the 2001 album Rubezh as well as from the not yet released Tsunami album. 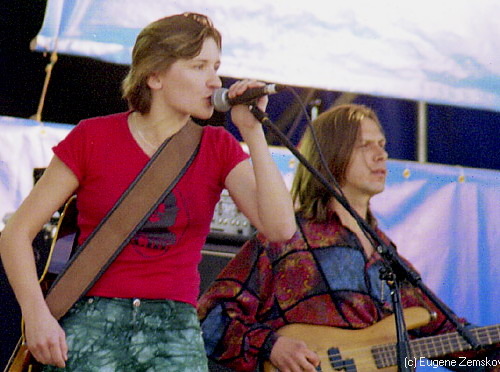 Second Nashestvie in the history of The Night Snipers is remembered, in particular, by the mass audience flesh mobs. Continuing the tradition born in spring of 2002, thousands of paper planes were flown into the sky during the song "Stolitza"; then for the song "Parokhody" paper ships attached to air balloons were sent to the sky. Snipers took the stage again on the second day of the festival and the half an hour set again consisted on songs from Rubezh and Tsunami albums. That year the festival had a record number of people, over 180 thousands. Besides that, Channel TV6 had a live broadcast of the festival. 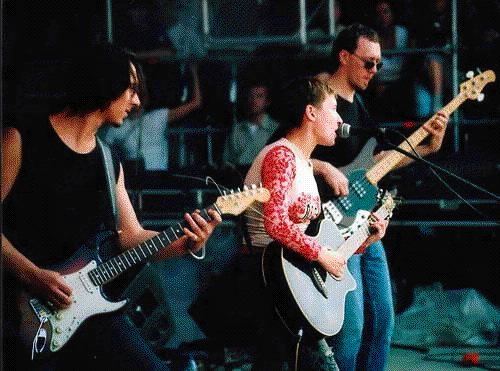 In 2004 the legendary festival returned to open-air; The Night Snipers returned to the festival as well. The band took the stage again on the second day of Nashestvie besides known and popular hits, the band played 2 songs that were new at the moment from a not yet released album SMS, "Asphal't" and "Senbernary".

The most memorable moment of the Snipers's appearance at the festival was the "shoting" of Diana Arbenina during the final song of the set, "Katastrophichesky". The idea belonged to one of the organizers of the festival, Maksim Vitorgan: during the interlude there was a loud bang and Diana's white shirt got colored with spots of "blood." 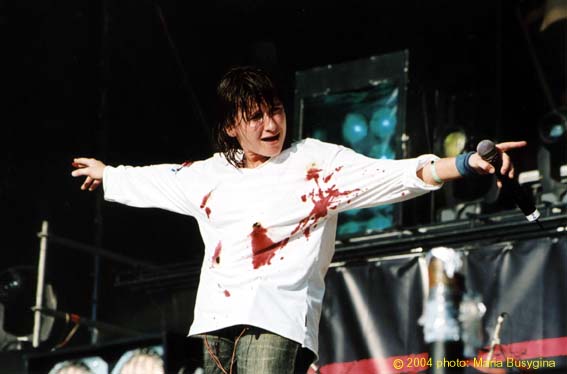 2005 passed under a symbol of Japan for The Night Snipers: besides the participation in an international project "Simauta", the band decided to record its first Japanese album and thus, during the festival Nashestvie Diana was in Tokyo working in a studio. That is why she attended festival virtually.
There was no separate snipers' set this year, though they decided not to cancel a planned duo with Bi-2 band. As a result, the song "Medlennaya zvezda" was sang in the live link up format Nashestvie-Tokyo.

Having missed the previous festival, Diana Arbenina compensated it in 2006 appearing on the main stage of Nashestvie twice. First day, August 5, there was a whole set by The Night Snipers, though, besides its own hits, the band played the famous British "Satisfaction." On the second day of the festival Diana appeared on the stage during Bi-2 set and this time the song "Medlennaya zvezda" sounded in a traditional duo. 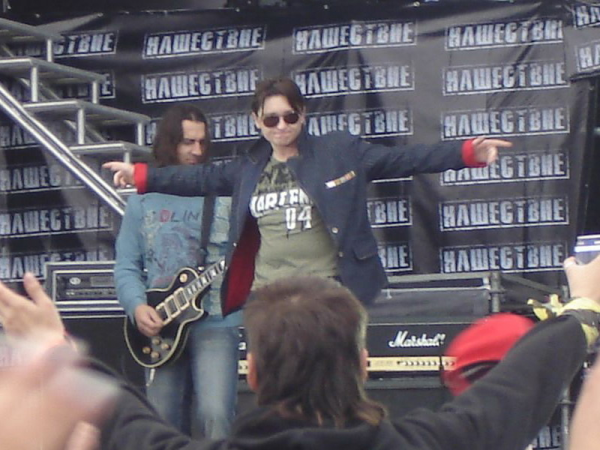 There was no festival held in 2007, though in 2008 Nashestvie for the first time turned into a three-day festival. This time the festival successfully gathered more than a 100-thousand audience. The Night Snipers performed on the second day, July 5.
In spite of the unusual heat, Diana Arbenina showed up on the stage in a formal black suit that was surprisingly accessorized by yellow rubber rain boots. These were distributed to the artists by the organizers of the festival to get to the stage after a really strong rainfall. Although soon Diana sent her boots flying into the audience and continued to sing barefoot.
Besides the traditional hits, snipers' set included some less famous songs like "Atlantida" and "Zemlyanichnaya." 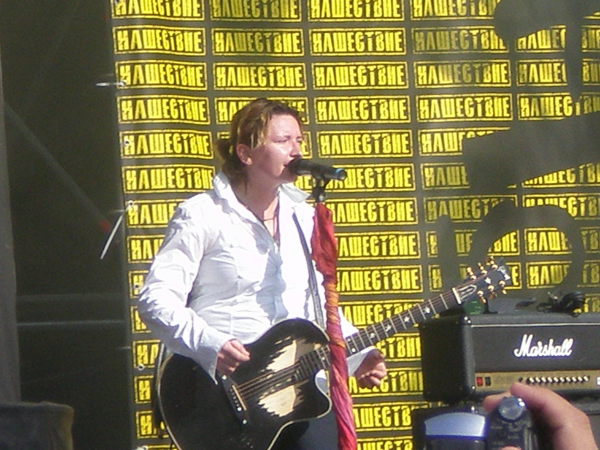 This time the festival was held in a village Bol'shoe Zavidovo in Tverskaya region for the first time, where it still stays till today. The Night Snipers played in the evening, at the end of the second day of the festival, and it is impossible not to mention that the sets of the band at the festival kept getting longer and longer with each year. This time the band played 10 songs, 2-3 from each of the electric albums, including songs "Yuzhny polyus" and "Prekrasnih dnei" played for the first time from a not yet released album Armiya2009.
Diana Arbenina, whose birthday was just a few days before the festival, decided to celebrate it again with Nashestvie audience. For that she brought onto the stage few hundreds red roses and threw them into the audience. 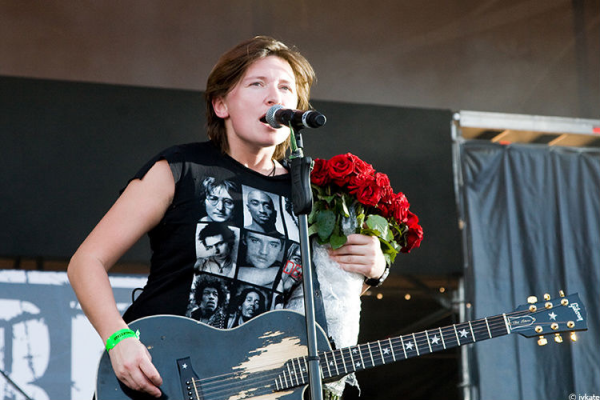 Just as at the most of the previous festivals, this year The Night Snipers again came onto the stage on the second day of the festival. The whole 2010 the band had devoted to the big Armiya Tour for the presentation of the album Armiya2009; the festival Nashestvie was no exception. Major part of the played set consisted of the songs from the new CD. Though,of course, there were the traditional hits, including the "business card" of Snipers, song 31aya vesna. 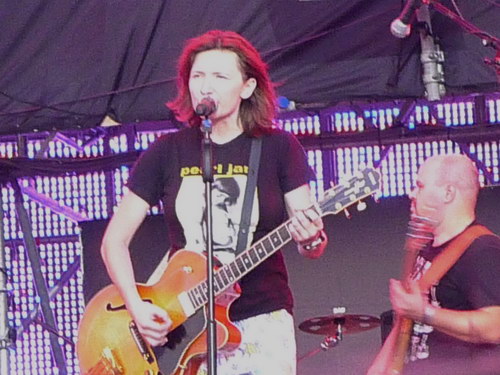 There was the main stage again, there was the evening of the second day of the festival and again, there was a thrilling snipers' playlist that included main hits of the band, known to every Russian rock follower, along with officially not released songs. This year, The Night Snipers surprised the audience with almost a premiere of a song. The song "Bunin" was performed publicly only once, a day before the festival, on July 8 in Petersburg.

There were also a lot of interesting things behind the stage this year. Nashestvie -2011 was the 10th jubilee festival and to commemorate that the organizers had decided to bring and show new different aspects of the favorite artists' work. During the festival there was an exhibition "Rock in paints" where famous rock musicians presented their art works, including art works by Diana Arbenina. 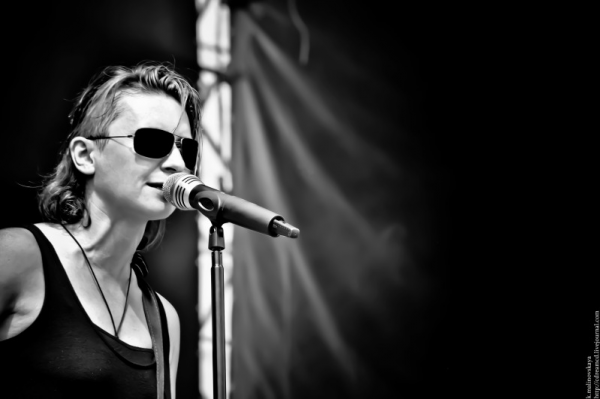 This year, The Night Snipers celebrated double jubilee at the festival, 20th anniversary of the band formation and the 10th time of performing at Nashestvie To commemorate this, there was a specially prepared big conceptual program with the main idea formulated by Diana Arbenina as such: "We have a clear task to remind people that everyone was once little and free. Rock musician should carry the idea of a strong and free personality in any country."

As usually, the Snipers came onto the stage on the second day of Nashestvie, though this time the set of the band went on for an hour. Along with the traditional hits, the band played some songs from 2012 album 4, such as "Gosudarstvo", "Google", "Absolyuti", and a new song " Pust' nam povezyet." 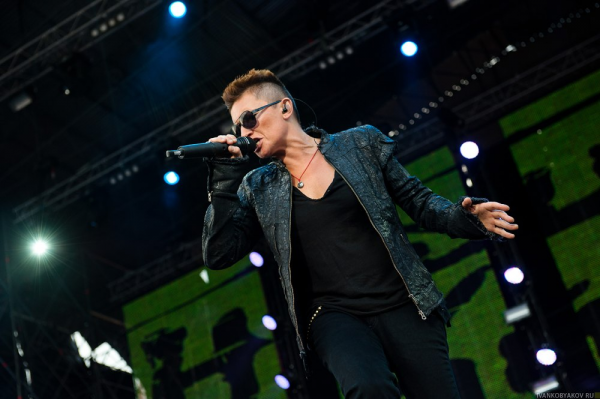 This Nashestvie became a breakthrough moment for The Night Snipers. The band was invited as a headliner for the first time, the set was completing the second day of the festival.
In honor of its 20th anniversary, the band prepared an absolutely unique 1.5 hour program. Coming to the stage together with Diana Arbenina and the musicians was the Snipers Choir, consisting of 120 fans of the band. The Choir's first appearance was in December of 2013, when they sang "Koshka moskovskaya" in the finale of the concert in Crocus together with The Night Snipers. Now, the Snipers' Choir performed the whole program of 15 songs from start to finish.
According to the results during the awards ceremony Chartova Dyuzhina, the snipers' set at Nashestvie was named the best concert of 2014. 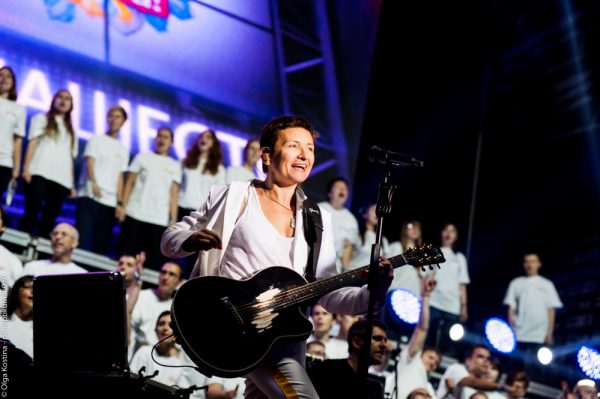 This time, The Night Snipers debuted as a band opening the festival Nashestvie. Snipers came onto the stage first, on the first day, July 3rd. The beginning of the snipers' set was solemnly accompanied by the brass band of the Suvorov College. There were also changes within the band. The Night Snipers were supported by the jazz back vocalists and a few invited musicians ( these musicians had already performed with the group as part of the Unplugged program).

Snipers stayed on the stage for about 50 minutes, having played a diversified program that reflected the band's work path for the 15 years. 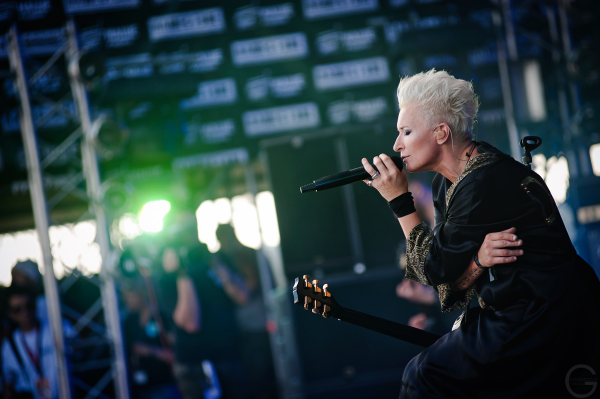 A little over a day is left before Nashestvie 2016. There, The Night Snipers will be the headliners of the first day of the festival. That day, July 8, Diana Arbenina will celebrate her birthday, thus, it is expected that the snipers program would be very different, special and unique. What is exactly is being prepared for the festival by the band is still a secret. Will see you at Nashestvie.